Portable Traffic Surveillance from £160 per Unit 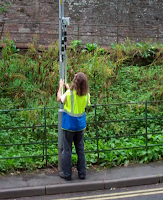 Recently client demand and personal interest led me to design/develop a cheap, easily installable and portable unit for recording video, which can be mounted directly on lighting columns and other suitable street furniture.

I had looked around for off-the-shelf devices that could serve this purpose, but they were all deficient in one area or another, be it battery life, recording format or storage capacity.

My solution is based on the Android smartphone platform, but the choice of device would depend upon budget and the precise application requirements.

Here are some general system specifications:
The application determines which smartphone is most suitable for each survey type.  Suitable phones start at around £100.

The cheap phone I initially used is based on the Dual Core Arm Cortex A9.  The camera module is not of high quality, and though fine during daylight hours, during periods of low-light, the frame rate is reduced to 8fps. The HTC phone costs a little more, but offers significantly better low-light video quality, and faster shutter speeds.  Outside the hours of daylight, the HTC phone provides acceptable quality footage, whereas the Star N9770 does not.

My preferred programming language is Python, and where possible I would always choose this over Java, but for the smartphone software I decided that using Java (Android's standard development language) would give me easy access to the core libraries required for this type of application.

It was relatively easy to implement this functionality, so the verbosity of Java didn't cause me too much frustration, and there were only a couple of challenges that required some deeper consideration.
The web server software which allows the periodic status and snapshot image uploads to be easily viewed from a web-based interface was implemented using Django and Python, and was also a fairly trivial exercise.

In order to protect the device from the elements, I decided to use a polycarbonate IP66 rated (weatherproof) enclosure, and mount the phone and other parts inside in such a way that they can be fairly easily replaced.  This is especially important when the enclosures themselves constitute a significant part of the unit cost, and when smartphone devices and their cameras are improving all the time.

To ensure there was sufficient power for a typical survey, I added a USB battery portable pack that provided an extra 12000ma without adding too much to the weight or volume of the unit.

My approach was to drill a small hole in the back of the enclosure, where the camera sensor would be, and replace it with a small piece of glass, this was glued with silicone sealant to achieve a weatherproof seal.  The transparent lid allows a better look at the internal layout, but the production units are fully opaque as this looks better, and won't get so hot on sunny days! 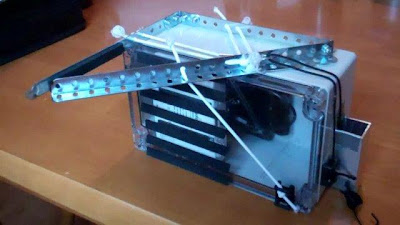 A few options for mounting the enclosure were considered, but I settled on a mechanism that allows the enclosure to be clamped on a lighting column using two light telescopic poles.  This allows the unit to be mounted at up to 4.5m which means views are largely free from vehicular obstructions. 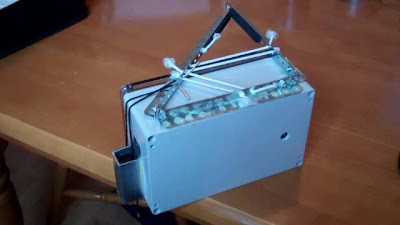 This spring clamp allows quick installation (around 30 seconds) on lighting columns up to about 90mm in diameter.

I subsequently also added a basic shield in the form of a small section of plastic pipe to the enclosure to protect the sensor area from rain and sun glare.

Once the video footage has been recorded, it can be easily extracted from the phone within the enclosure using either USB or wirelessly, and processed to form video that can be used either within the advanced enumeration software which I have also developed (www.countforcash.com), or in some cases within machine vision software that I am working on.

These units are to be used for various survey purposes ranging from vehicle turning counts and queue length surveys to cycle and pedestrian surveys.  The ease of installation and low cost means they can also be deployed to reduce the impact of any other hardware or equipment failure, or even to monitor other equipment for vandalism.
Posted by Unknown at 09:51